Carl Bratcher’s Sinultimata has built a rather diverse fan base from lovers of classical music right through to Progressive Electronic/Kraut/Psychedelic/Tripper rock fans.

Their first album, ‘Origenes’ (2011) released a mere two months after the bands formation was so over the edge that it didn’t take too well with the audiences, possibly because it was recorded during the tumultuous beginnings of the band. Bratcher wanting more of a classical driven style whereas Mike Linkmeyer preferred the acid type and Dario Preston was totally non-plussed. What it did do was introduce to the world ’Sid’ the decaying head you occasionally see on Sinultimata album covers. The album is currently being re-mixed for re-release.

The next album, ‘Pinturas de las Fobias’ – a trip through a panic attack, was Bratcher and Linkmeyer only – Preston left the band for personal reasons. The final mix had the classical leanings Bratcher wanted but Mike Linkmeyer chose to argue so it never saw the light of day apart from a short lived promotion that saw Linkmeyer pull the pin, leaving Bratcher behind to continue on alone hence its non-release. This however now the legalese have been sorted, should be remedied mid 2014 (May is the target month).

This brings us to the current lineup.
‘Suite Española’ see’s Bratcher play all instruments except guitar on Granada and Prelude in E which is Alex Tynes (Geoff’s (the engineer) younger sibling).

The Carnival of the Animals and Other Enigmas is out now, and features Bratcher and Tynes – this CD is to raise money for Cancer Research – so BUY IT!!

Letters to Daddy – is a personal homage to those who fought, survived, died and those left behind during WWI and WWII. Essentially Bratcher alone, it takes the listener on a trip through the thoughts of a child and its father, a father that will be lost to them forever due to the ravages of war.

“The wars touched virtually everyone on the planet in some way or another and I’m no different,” said Bratcher, continuing with “My paternal grand father fought in both wars, the First World War at the age of 15 then re-enlisted for the Second. My maternal grand father died in 1939 so I never had the chance to meet either.”

Intimate Moments, Live in the Garden – started off as a jam/practice session with Alex and session muso Terry O’Brien sitting in on drums and percussion, plus Bratcher wanted to make use of a borrowed Synthesizers.com Studio 110 Modular (many thanks to Martin Whitby) to see if they were worth buying. In the end, a so-called jam session had approximately sixty people sitting around watching so it went from jam session to unofficial bootleg to release so don’t expect perfect sound.

Dychwelyd y Ddraig Goch, is more a concept album than anything else. Essentially it’s about how the Welsh should be dispatching the invaders and have home rule. It didn’t go down too well but Bratcher was never one for holding back.

Eight. As the name suggests, is Sinultimata’s eighth album. We won’t go in to it too much as the release date is coming up so you can wait a few days but to say it could have been a solo album would pretty much nail it on the head with Bratcher playing all instruments.

Who is Sinultimata?
Sinultimata has built a rather diverse fan base from lovers of classical music right through to Progressive Electronic/Kraut/Psychedelic/Tripper rock fans.
Carl Bratcher, born in Ely, Cardiff in Wales in 1958 – now a permanent resident of Sydney Australia. All keyboards, occasional guitar and bass – the founder member and originator of the band’s name. A fiction writer, artist, collector of vintage synths and a vintage motorcycle nut. Formed his first band in 1974 as a bassist vocalist, then joined Ally in 1976 as vocalist, then drifted from band to session and bands.
He uses the following.
Moog Voyager, Little Phatty, Memorymoog, Minitaur. Korg: MS2000, MS20, MS10, Kronos, Karma, ARP Odyssey. Nord: Lead. Roland: S100, RS-09. Arturia: Keylab, Beatstep. Paia Theremax. Synth dot com Studio 88. Asturcon, Fender Guitars and Basses, various pedals and his pet hate, the occasional VST.

Alex Tynes, born in Gijon Spain to a Welsh mother and American father in 1962, guitars, bass, keyboards, has been playing guitar since the age of ten, designer of custom guitars, also an artist but a lover of Corvettes. Sinultimata is the first band Alex has ever joined as a full member, preferring to do session work which is where Bratcher picked him up from.
He uses he following.
Asturcon, Gibson, Fender and Yamaha guitars, and too many pedals to mention.

Terry O’Brien, born in Auckland in 1960 is the newest ‘semi’ member, filling in with acoustic percussion.

We’ve been asked where the name came from. It was originally a short story based on the seven deadly sins written by Carl in 2001, if you want to read it click here (pdf) 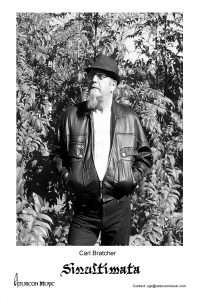